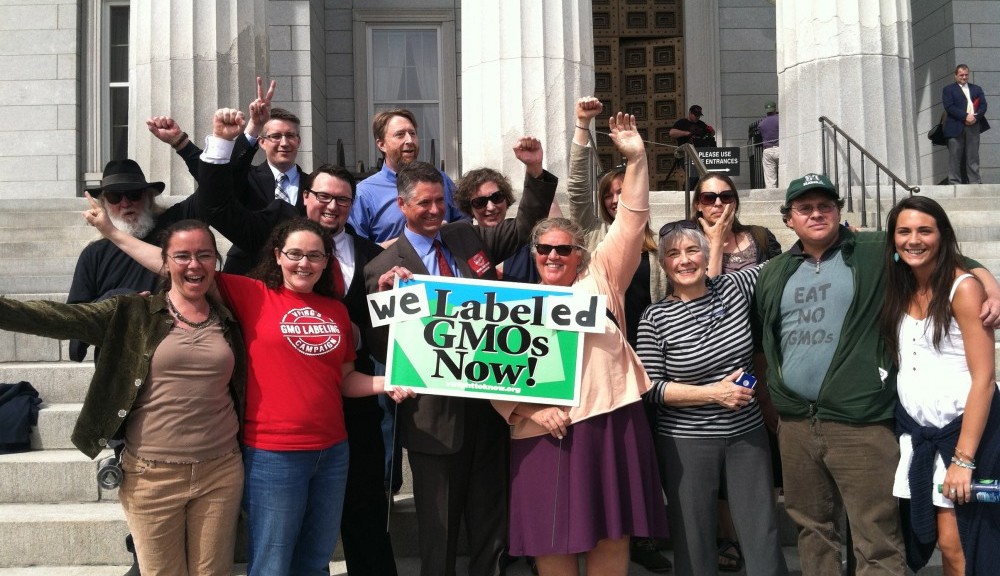 Just before the close of the 2015 session, both chambers of the legislature voted overwhelmingly to pass H.35 – a bill aimed at improving water quality in Lake Champlain and other Vermont waterways. After much debate among legislators and stakeholders, especially over funding, the bill provides around $7.5 million toward implementation and enforcement of new water quality regulations. Some primary funding sources include a surcharge on the state’s property transfer tax, fees on medium and large farm registrations, and fees on the sale of non-agricultural fertilizer and pesticides. In part, these funds will be used to pay for enhanced education, outreach, enforcement, and inspections by creating 8 new positions at the Agency of Agriculture and 13 at the Department of Environmental Conservation.

While passage of H.35 set the stage for changes to Vermont’s agricultural and stormwater management practices, many details of the clean-up initiative will be fleshed out through a rulemaking process over the coming year. For example, one key provision of the bill calls for the State to develop new regulations for reducing pollution from farms, changing accepted agricultural practices (AAPs) to “required agricultural practices” (RAPs) since they will be mandatory under the new legislation. What exactly those practices will include has yet to be determined. As the State works toward implementation of the law, NOFA will be working to ensure that organic farmers are aware of any new requirements they may face, while also working with State partners to ensure that implementation is as practical and effective as possible.

The legal battle to uphold Vermont’s GMO labeling law has often been described as a classic David and Goliath-style battle, wherein our small but mighty state is pitted against the gargantuan likes of the Grocery Manufacturers Association (GMA) and the International Dairy Foods Association (IDFA). As the legal challenge brought by the GMA and others begins to move through the courts, members of the VT Right to Know GMOs coalition are working to ensure that our battle ends with the same happy result as that famed parable.

On April 27th of this year, the first significant blow was dealt to the GMO giants in the form of a ruling by the U.S. District Court for the District of Vermont. In the ruling, Judge Christina Reiss soundly rejected plaintiffs’ attempt to halt implementation of Vermont’s GMO labeling law (Act 120), dismissing claims that the law is unconstitutional and preempted by federal law. On May 6th, plaintiffs appealed the District Court’s decision, though a schedule for the next steps has not been set as of this writing.

In the meantime, Act 120 is set to go into effect on July 1st of 2016, giving food producers, distributors, and retailers just over a year to prepare to put GMO labeling into action in the Green Mountain State. For more information and ongoing updates on the GMO show-down, you can visit the website of the VT Right to Know coalition or Attorney General Bill Sorrell.

From June 16th to 18th of this year, the National Organic Coalition (NOC) will be holding its annual meeting and hill visits in Washington, D.C. NOC, of which NOFA-VT is an active member, is an alliance of organizations working to provide a united voice in Washington for the organic community and to maintain the integrity of organic food and farming nationally. This year, NOC’s annual fly-in will bring national stakeholders together to strategize on key issues like advancing organic integrity, growing domestic organic supply, and preventing genetic contamination on farms. While in DC, I will be meeting with USDA officials and Vermont’s Congressional delegates to discuss current issues that impact Vermont’s organic farmers and eaters. I look forward to thanking our federal representatives for the difficult work they do and will be asking them to continue to stand up for policies that work for Vermont’s organic food and farming community.

We’ve just got word that Governor Shumlin plans to sign H.112, Vermont’s GMO labeling bill, next Thursday, May 8 at 2:30 PM. We’re planning a statehouse lawn celebration – please join us! More details coming soon – follow us on Facebook or Twitter for the latest.

On April 16th the Vermont Senate voted 28-2 in favor of H.112, which would require the labeling of foods made with genetic engineering. This brings Vermont very close to final passage and enactment of the nation’s first GMO labeling law that does not include a multi-state “trigger, which would require indefinite postponement of its implementation.

To visibly demonstrate to Governor Shumlin how important it is for him to sign the bill into law, the Coalition is calling for “honk and wave” events next Tuesday, April 22 (Earth Day) during morning “drive time” — not just in Vermont but all across the country. Our national partners and supporters are helping to organize this.

Use this online tool to set up and share your local honk and wave! END_OF_DOCUMENT_TOKEN_TO_BE_REPLACED

At 11am today, the VT Senate Judiciary Committee, after several weeks of work, voted 5-0 in favor of our GMO labeling bill. The bill contains no triggers and establishes a special $1.5M fund to cover implementation and legal costs, if necessary. Funds would come from Attorney General office proceeds from other cases and unrestricted donations from individuals, organizations, etc, both instate and out of state.

After a quick trip to the Senate Appropriation Committee to set up the fund, it will move to the Senate floor where it is expected to pass. Timing is uncertain but could be quite soon. Then it will go to the House for either approval of the Senate bill, or to a conference committee to resolve differences between the House and Senate versions.

Then it will go on to the Governor’s desk.  Just before the Judiciary committee voted, one member, a Republican  whose vote was uncertain until the end, said, “Vermont is about to go where no state has gone before.”

So, we are all  quite pleased, but as we know, it ain’t over ’til it’s over! This is a great time to get in touch with your senators and let them know that you expect them to help pass this historic legislation.

Visit the Vermont Right to Know GMOs website to learn more and get involved. 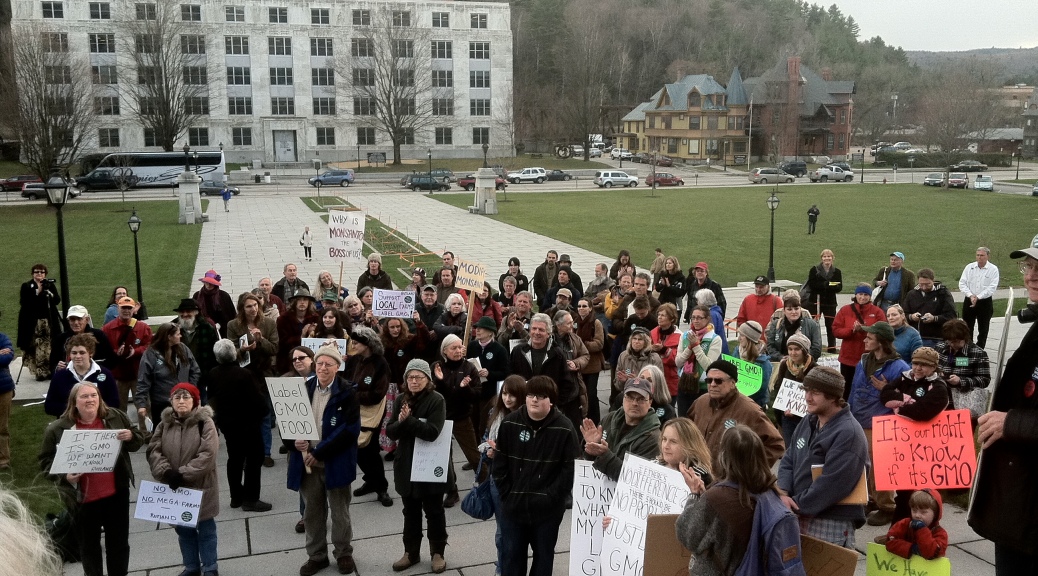 The Vermont Senate Agricultural Committee has been hearing testimony on the GMO Labeling bill for weeks – ever since the legislative session opened in early January.

Now, it’s time for citizens to make their voices heard! Join the hearing at the Statehouse in Montpelier on February 6, starting at 6:00 – and tell your legislators why YOU have the right to know what’s in your food!

We strongly recommend arriving early if you’d like to testify; the sign-up sheet should be available at 5:30. Based on our experience from a similar public hearing in 2012, the line will likely be long!

You can let us know you’re coming by registering with the Vermont Right to Know Coalition, which is a joint effort of NOFA Vermont, VPIRG, Rural Vermont, and Cedar Circle Farm.

For more information about NOFA Vermont’s role in the Vermont Right to Know Coalition, or to get involved with the campaign, contact Dave Rogers, NOFA Vermont Policy Advisor.

Vermont GMO labeling bill (H.112), which passed the VT House last May by a wide margin, is now being debated in the Vermont Senate. H.112  would require that foods made with  genetically engineered (GMO)  substances be labeled as such.

Success in the House — in the face of  well-financed  opposition by a number of global chemical and food corporations — was due to thousands of Vermonters who contacted their representatives and told them — loudly and clearly — to  support H.112.

As in the House, passage of H.112 in the Senate and final enactment  into law, will require thousands of Vermonters to let their voices be  heard by their Senators and in their communities.  The opposition’s  lobbyists and PR people are already at work in the Statehouse.  They  are is determined to kill this legislation — no matter the cost.

Now is the time for Vermonters, once again, to let their voices be heard in their Statehouse and by their elected Senators. On January 16, the Vermont Right To Know GMOs coalition, of which NOFA  is a member, will be holding A GMO Rally, Teach-in and Lobby Day at  the Vermont Statehouse.  At this event you will learn more about the  issues and how to make sure your voice is heard in the Statehouse by your Senators.  Full information about Lobby Day agenda can be found on the Vermont Right To Know GMOs webpage.

Scores of Vermonters have already registered to attend. We hope that you and your neighbors and friends will be able to join us. Let’s show ’em how democracy ‘gets done’ in this little state.